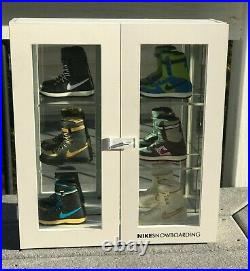 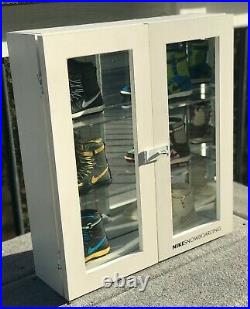 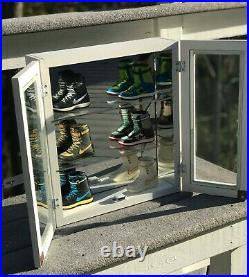 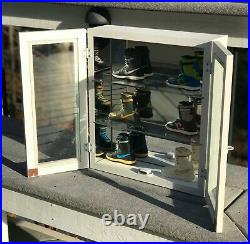 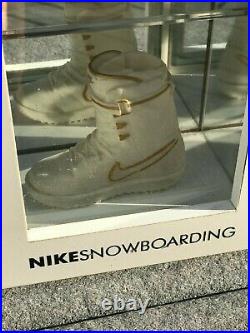 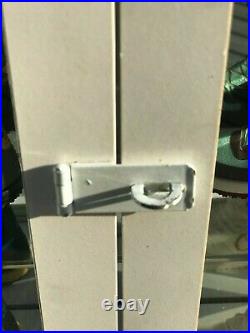 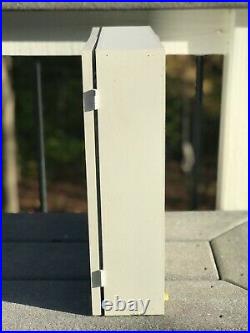 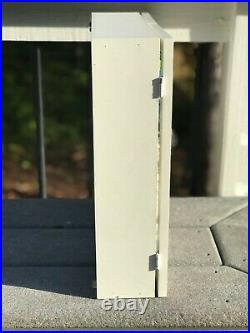 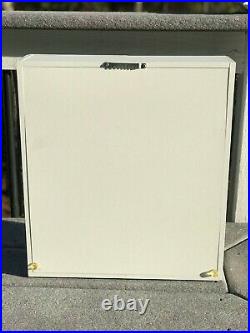 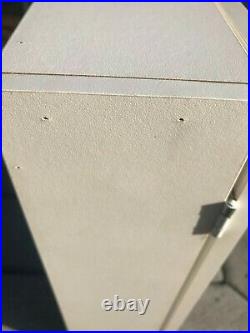 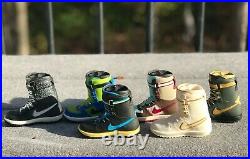 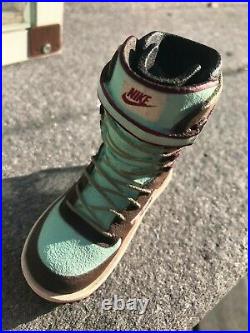 Their stance is that due to the high number of outgoing packages vs. The lack of workers that can handle the load these delays are inevitable. Our goal is to provide excellent customer service. Here is an extremely rare Nike Snowboarding Mini Snowboarding Boot Retail Display from the first year Feb. 2000 that Nike entered the snowboarding hard goods Boots, Bindings and Snowboards etc.. 3 years prior in 1997 Nike entered the Snowboarding market with apparel. This specific display was used in a Nike tradeshow booth to promote the new snowboarding boot products. The display is wood with glass doors, mirror background and two acrylic shelves. The display measures 15 1/2 inches x 14 inches x 4 inches. There is a latch on the front for a small lock. A small lock does NOT come with the display. This feature prevented retail customers from removing the boots from the display. The Nike Snowboarding logo is on the bottom corner of the display in black and the lettering is raised. Please note the bottom part of the W in snowboarding is coming off a little. Very minor but I will always state any issues no matter how small.

The rear of the display has a bracket for hanging the display. However, this particular display was only used on a tradeshow booth table and then stored in the box until last year when I acquired it. This Nike display is 19 years old and in great condition for its age as you can see in the pics.

There are small holes on all four corners of the sides of the display(see pic). These holes are from manufacturing and was present when the display was brand new.

The display also comes with the original 6 micro plastic molded boots. Each boot measures 3 1/2 inches X 3 1/2 inches. 4 mens boots and 2 womens boots. In the display it looks like two boots for each style totaling 12 boots, but that is the mirror reflecting the single boot.

There are only 6 boots in this display case. Nike exited the snowboarding industry in 2014, but was still a powerhouse brand for the decade they were in. Nike sponsored some of the biggest names in snowboarding. Sage Kotsenburg-Olympic Gold Medalist, Danny Kass-Olympic Silver Medalist, Scotty Lago-Olympic Bronze Medalist, and Louie Vito-Winter X Games Gold Medalist to name a few..

This Nike Snowboarding retail display is a rare piece of Nike and Snowboarding history. Here is your chance to own a rare item that was only provided to retailers and those Nike representatives that promoted the new snowboard boot line. In addition, because Nike was only in the snowboarding market for a short time displays like this dont come around. I have never seen another one and I collect Nike retailer signs and displays. Check out my other items for sale. We are a smoke free home. Only ships to the lower 48 states in the US and the address listed on the Pay Pal account. The item "Nike Snowboarding Mini Boot Retail Display Rare" is in sale since Tuesday, December 29, 2020. This item is in the category "Collectibles\Advertising\Merchandise & Memorabilia\Store Displays". The seller is "sportsgrail" and is located in Ashburn, Virginia. This item can be shipped to United States.