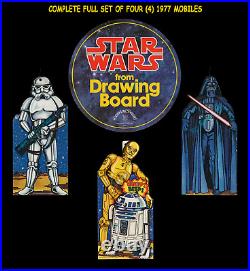 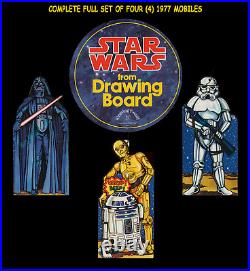 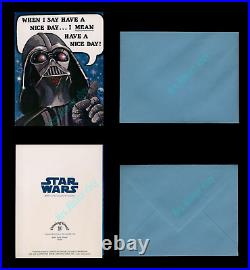 Here are some of the most interesting, nicest, and, most important Star Wars advertising pieces ever created. An Original set of 1977 "Star Wars" Store Display Ceiling Hanger Mobiles issued while the film was in its very first release! Back in 1977, Star Wars burst onto the scene with little advance fanfare. There were very few licensees that had signed on before the movie's initial May 25th opening [HAPPY BIRTHDAY Star Wars].

Once the film hit, creating the instant sensation of long lines around theater blocks and word-of-mouth chatter throughout the country, a slew of manufactures scrambled to get products ready. Drawing Board moved fast, printing a plethora of products like stationary, napkins, children's party plates, stickers, etc. Subsequently, they were able cash in BIG on the early explosion of interest in the film. These three VERY RARE store display mobiles (or ceiling hangers/posters) were issued into their outlets to advertise the said products - while the film was still playing its first run!

The three two-sided posters are in. I posted photos of the fronts and backs. The Vader and the Stormtrooper measure 10 and 1/2 inches tall and the circular title piece measures 10 inches. All three are dated 1977. Also, as a freebee, I'm including an unused 1977 Darth Vader greeting card (see photo #3), with the original envelope, as a nice example of what these displays are advertising.

The magnificence of art and historic documents have an inherent value that relates to civilization and society. Please write with any questions. If you are in the market for top quality original vintage movie posters or Star Wars, then please. This item is in the category "Entertainment Memorabilia\Movie Memorabilia\Posters\Originals-United States\1970-79".

miniver" and is located in this country: US. This item can be shipped worldwide.